Before: Introducing the project

At the end of March, SAWC completed on the ground restoration work on a small tributary that feeds into the Pat’s Creek watershed near Wrangell, AK.

This tributary had been damaged and blocked off in areas as a result of previous logging operations at the site. The goal of this project is to return the stream to its natural condition prior to logging, allowing for fish passage and sustaining habitat for fish species.

Here’s an overview of the project site before restoration took place (photograph taken from the Zimovia Hwy bridge): 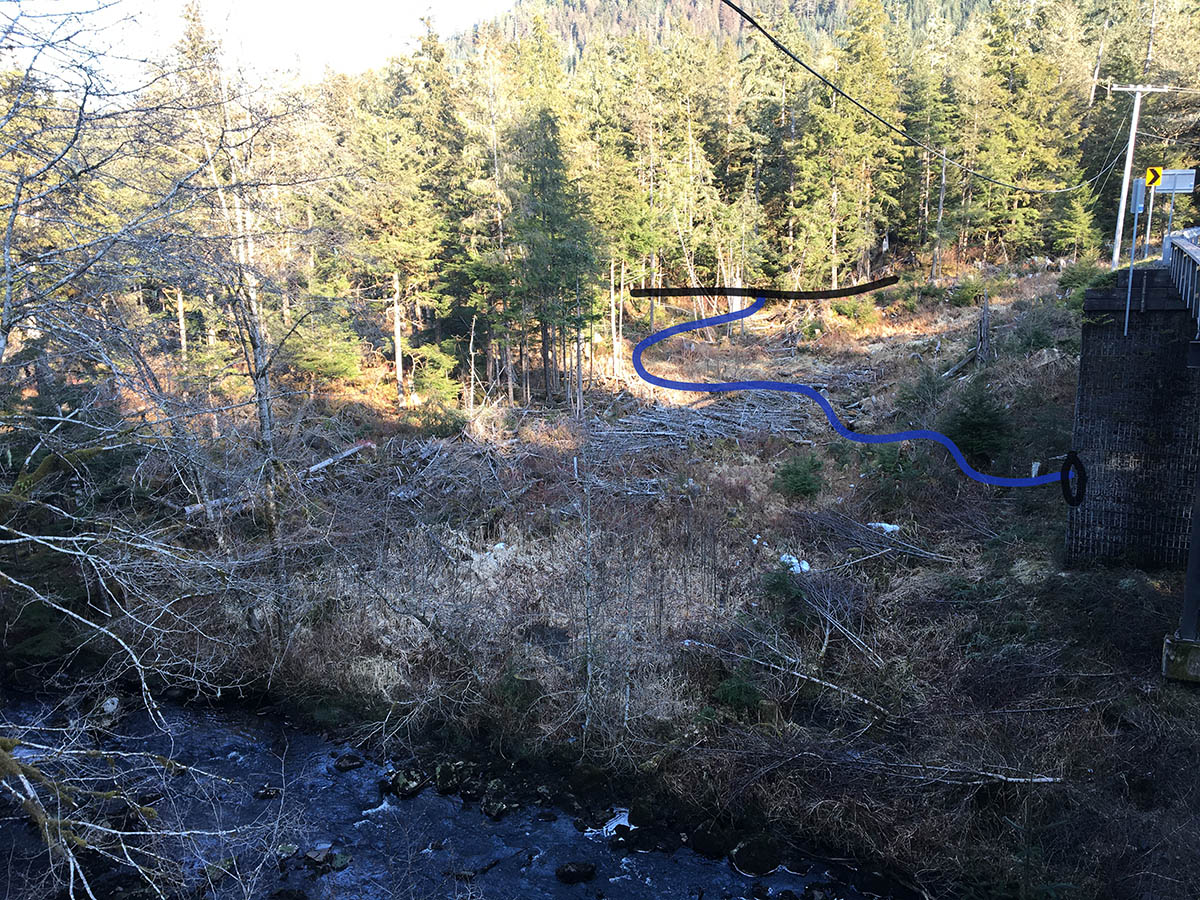 The blue line shows roughly where the stream channel lies beneath piles of slash, sod, and a discarded puncheon trail. This stream crosses under a log stringer bridge from an old road (the black line), and flows through the clearcut before passing through a culvert beneath Zimovia highway and meeting up with the main channel of Pat’s Creek downstream of the highway. 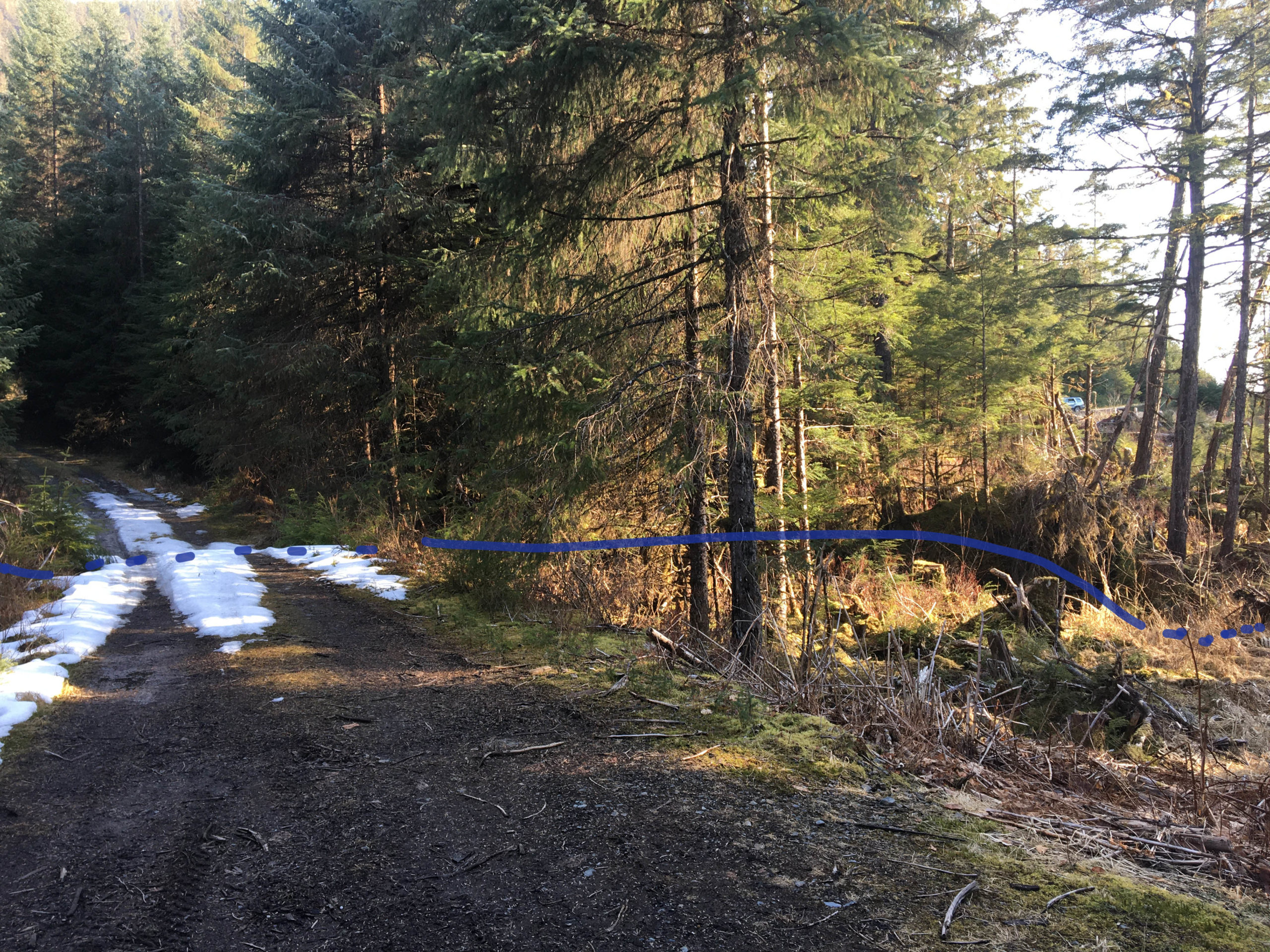 Above: An old road leads to the edge of the main channel of Pat’s Creek. This road was used as an access point for logging activity at the site. Our targeted tributary crosses under the road here (note the dip in road covered with snow), at a deteriorating log stringer bridge that will eventually collapse and possible block fish passage.

After trees were cut, discarded stumps, slash, and sediment were left behind and compacted over the stream’s natural channel. The photograph below shows roughly where the historic stream channel moves ‘underground’, buried beneath logging slash and soils. 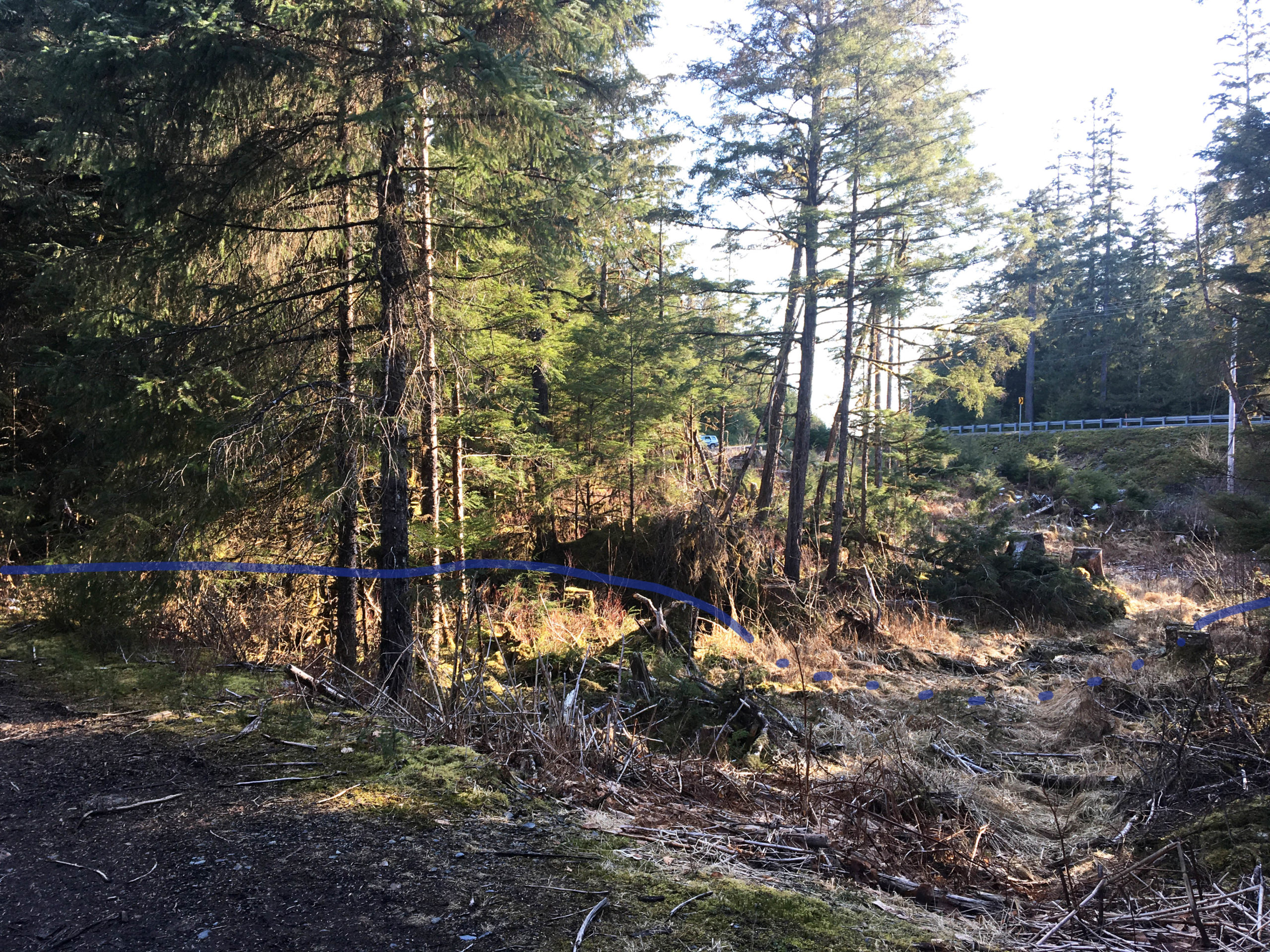 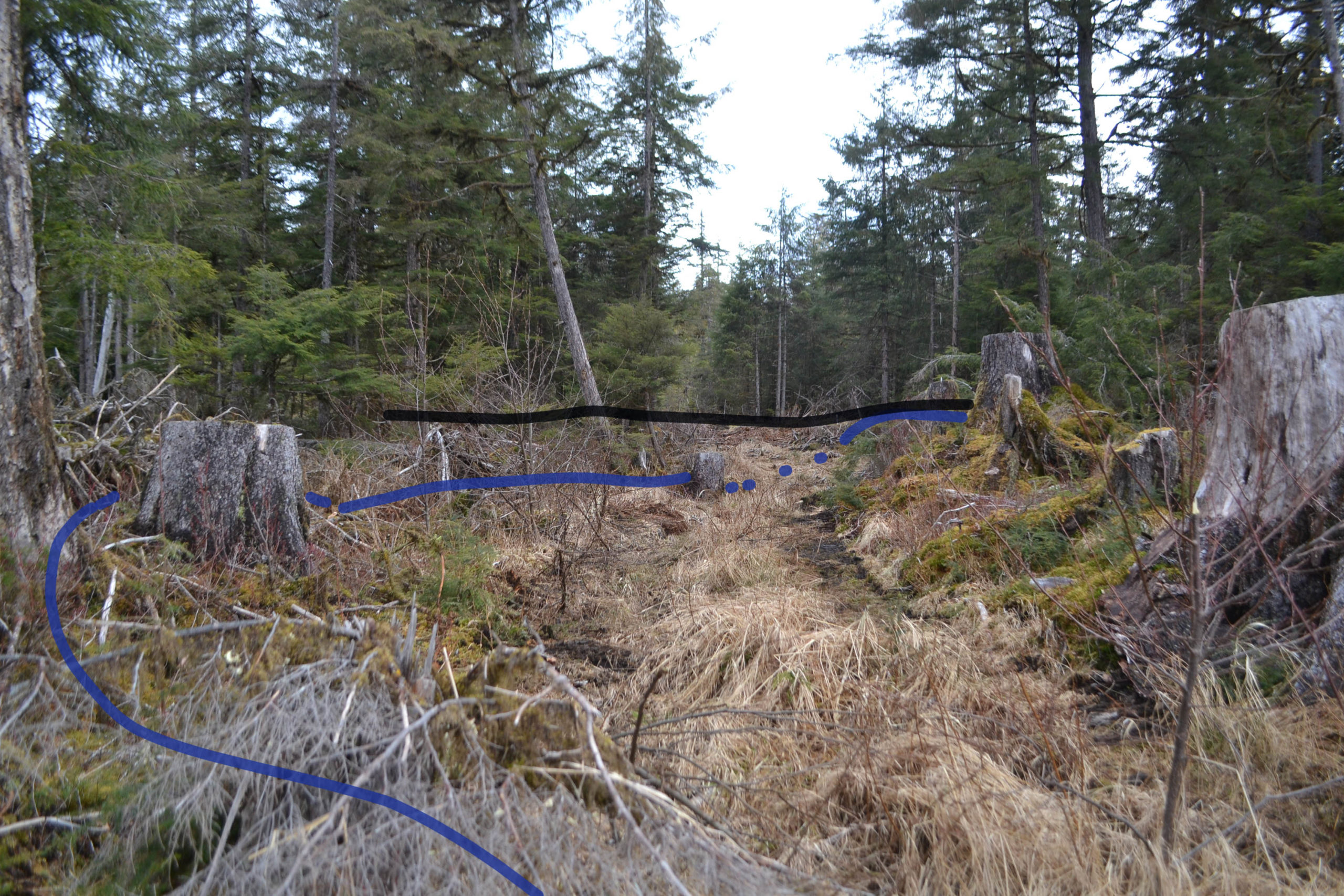 This photograph is taken downstream of the old road (the black line), showing from another vantage point where the stream channel becomes smothered by discarded and compacted slash and soils. 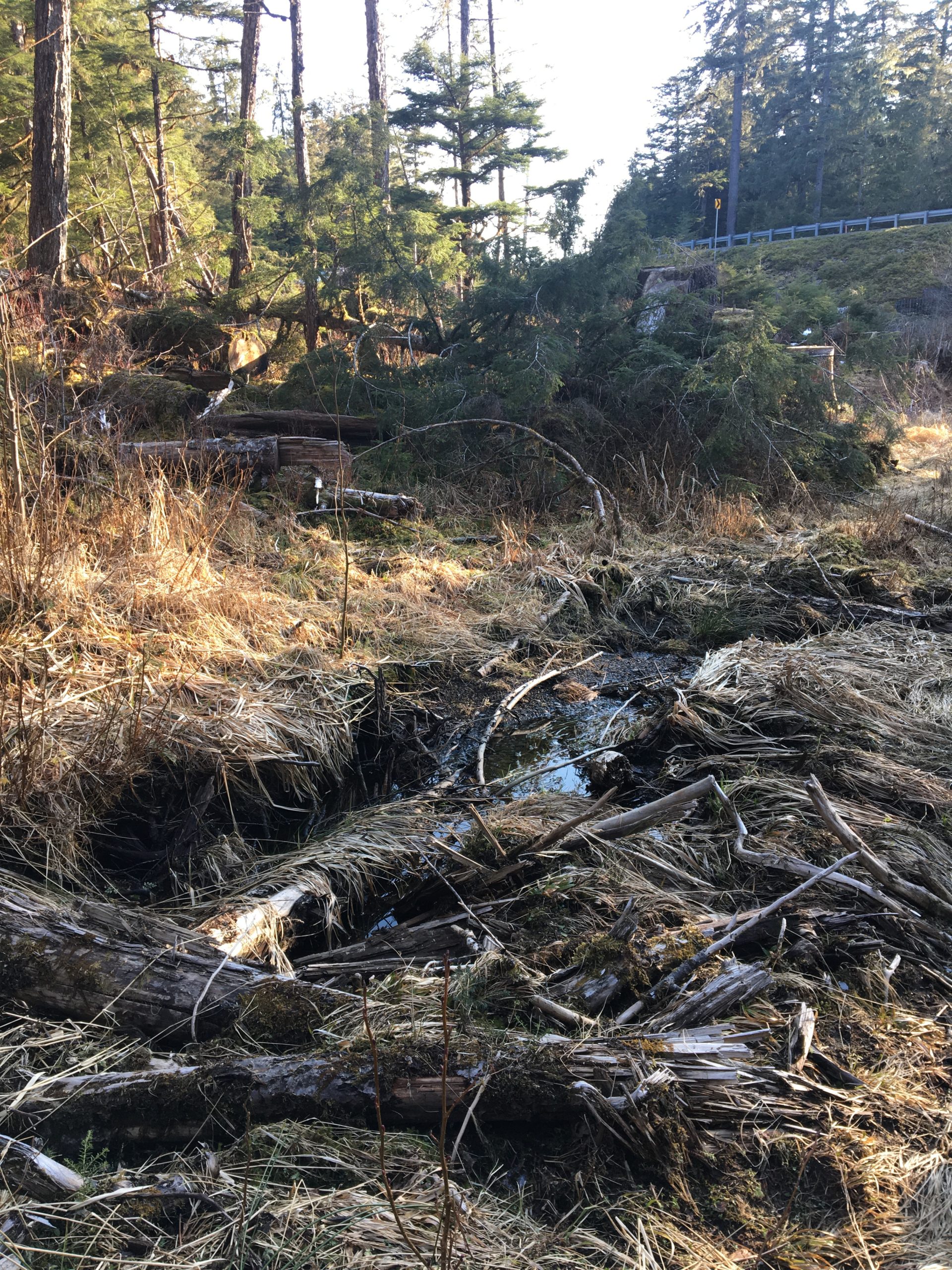 Above: A closer view of a blocked section of stream channel. 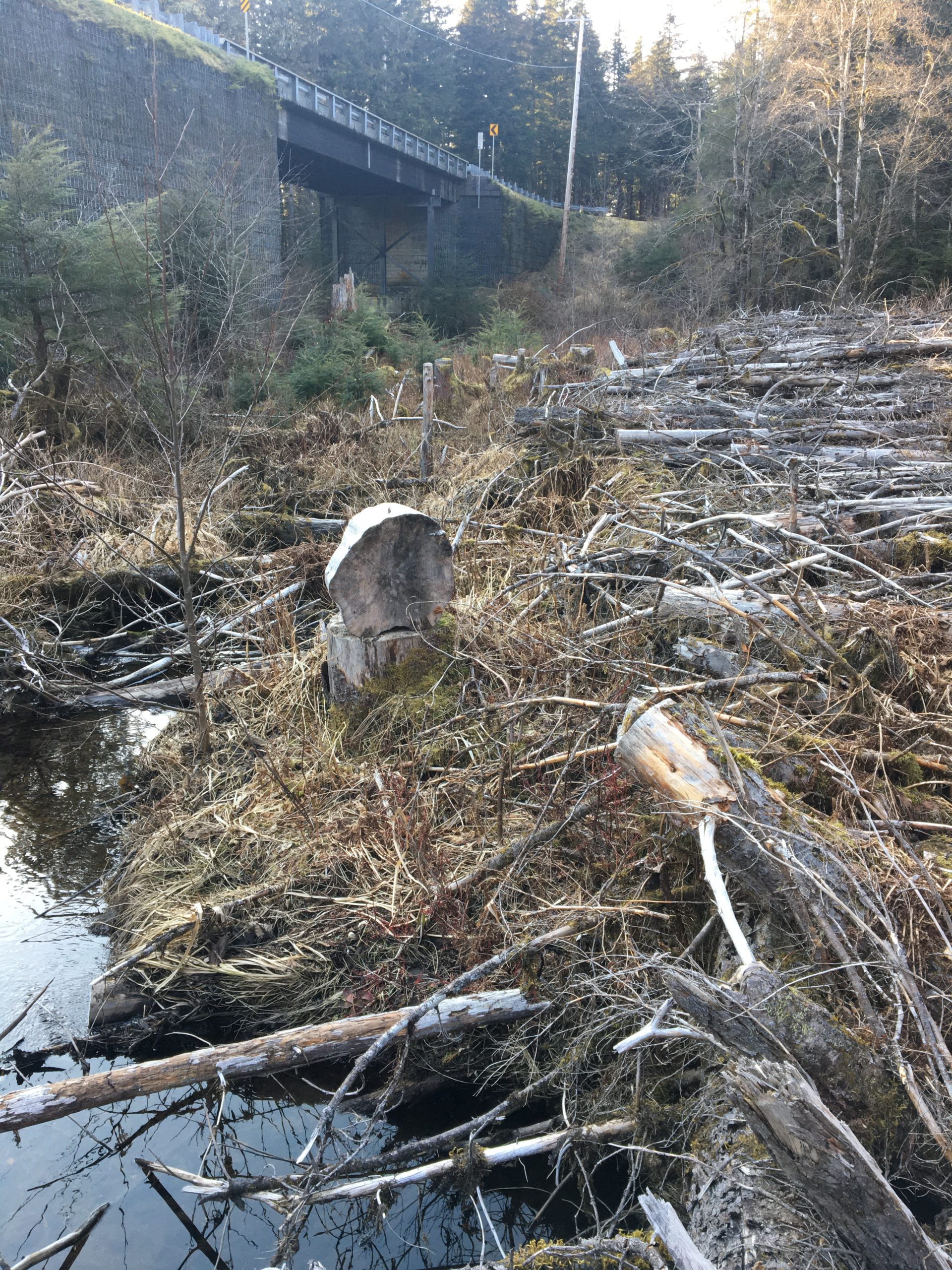 A closer view of discarded slash and the puncheon trail. This discarded material lies right in the streambank of some areas of the channel, making it difficult for new riparian vegetation to gain a foothold along the stream. Riparian vegetation including red alder and Sitka spruce stabilize banks and offer cooling shade and protective habitat for fish using the stream.

During: On the ground restoration work

Thanks to support from the US Fish and Wildlife Service, SAWC contracted the services of BW Enterprises in Wrangell to restore habitat on this stream. We used existing pathways and puncheon trail to work backwards through the project site – using a chainsaw and excavator to remove slash and clean and expose the stream channel along the way. 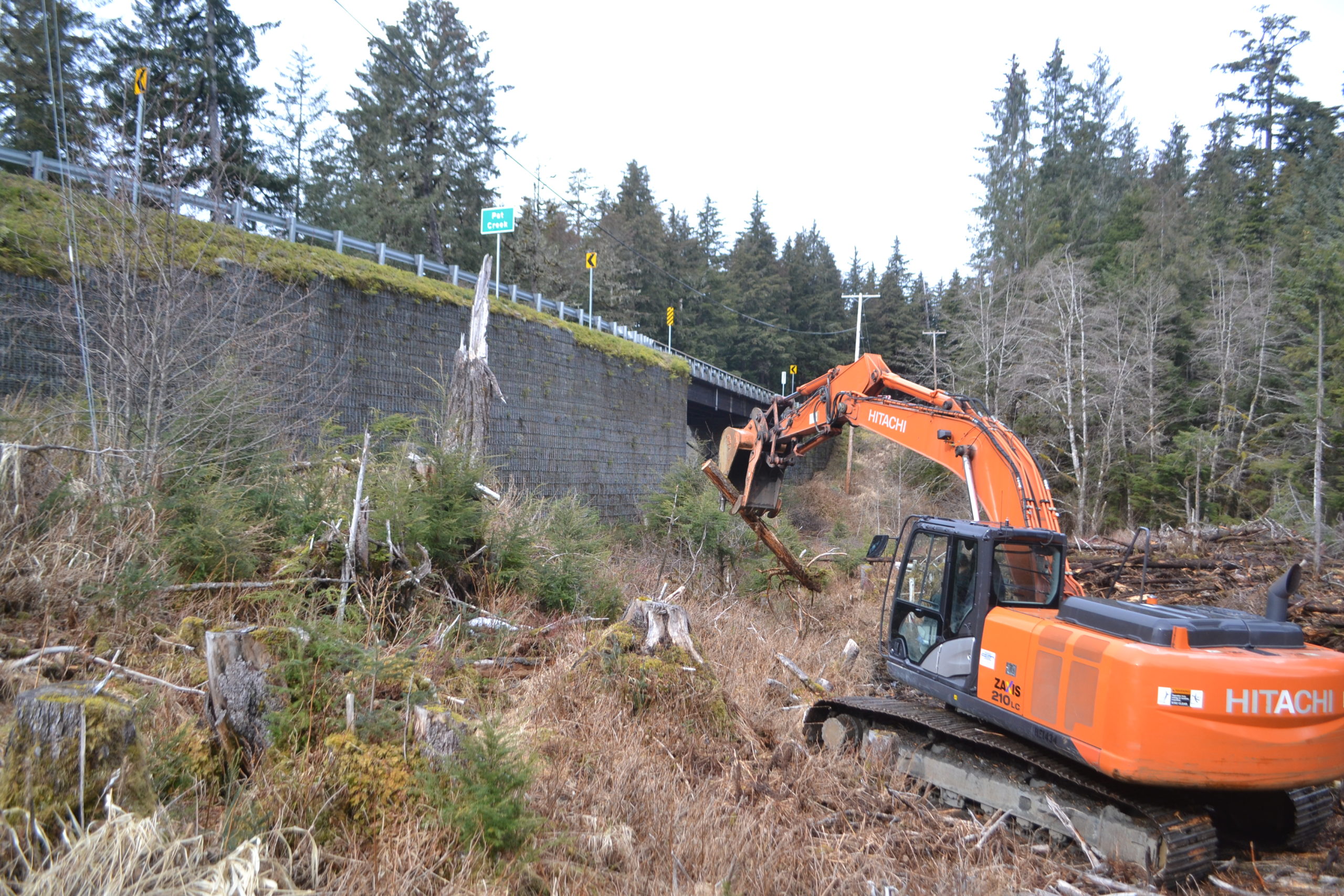 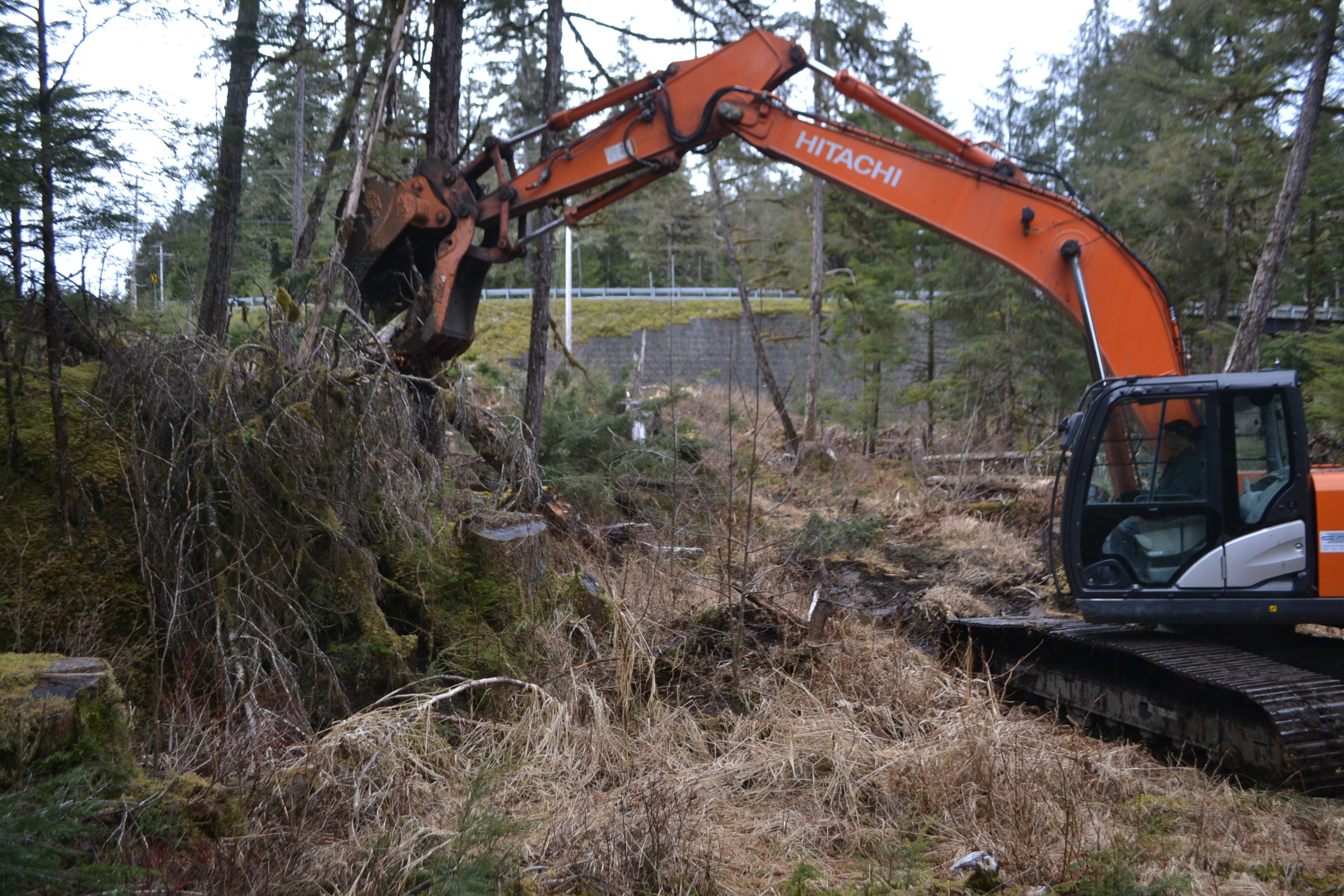 Above, the excavator removes stumps, slash, and soils from the area where the stream channel had become smothered. Afterwards, the channel was reshaped to match the size and gradient of undamaged portions of the stream. 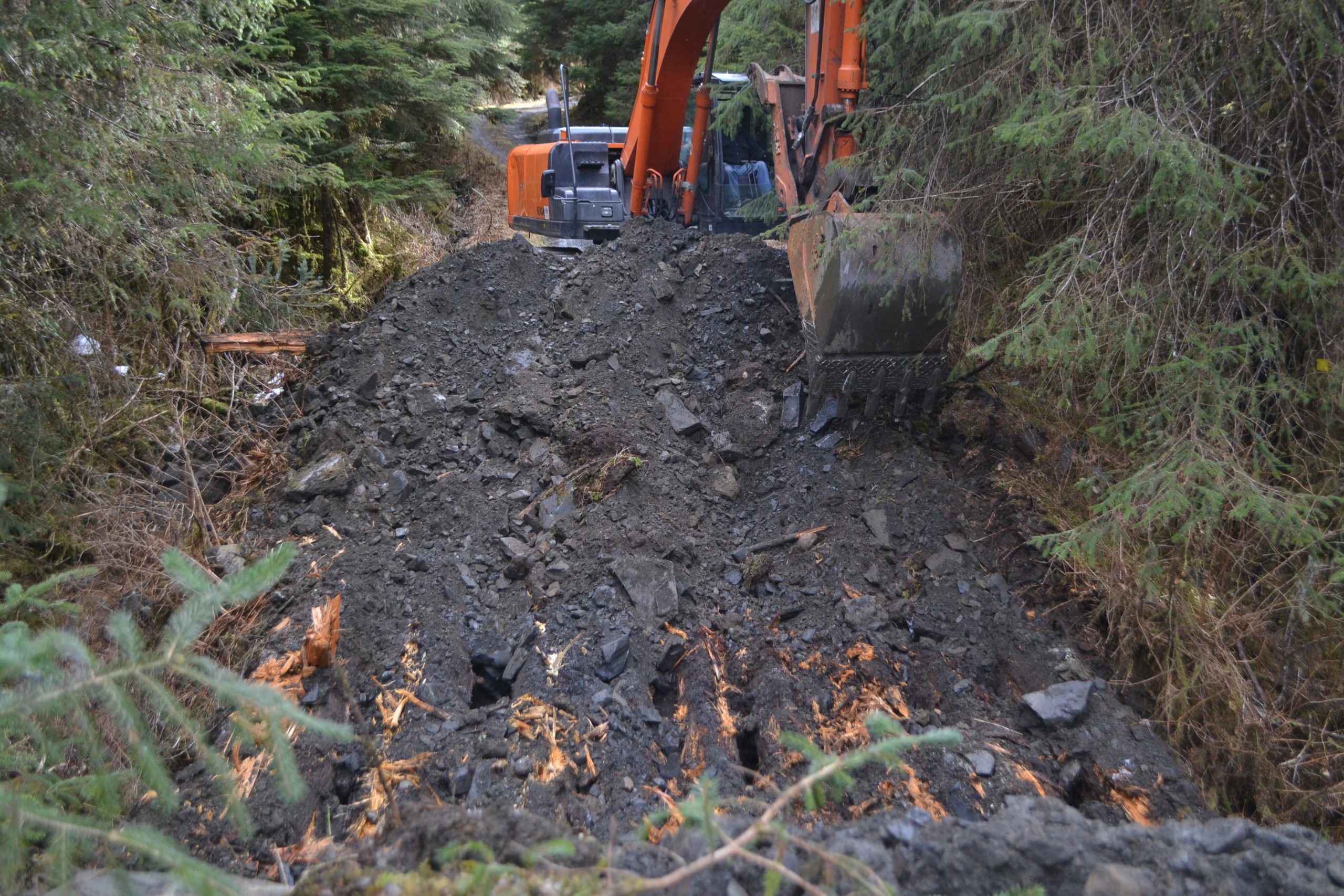 Before removing the bridge, we decommissioned and scarified the old road leading to the banks of the main channel of Pat’s Creek. This scarification breaks up compacted soils and encourages the new growth of alder and spruce to vegetate the area.

The deteriorating log stringer bridge was removed, and the stream channel crossing beneath was restored. The stringer logs were used to block vehicle access to this portion of the decommissioned road.

After: The restoration project is complete

These overview images show the site after work was completed: the puncheon trail and slash piles have been broken up and moved away from the stream bank, allowing future riparian vegetation to take hold and grow up around the stream. Areas where the stream channel had been smothered by materials are now clear, and the stream can flow freely through this site. 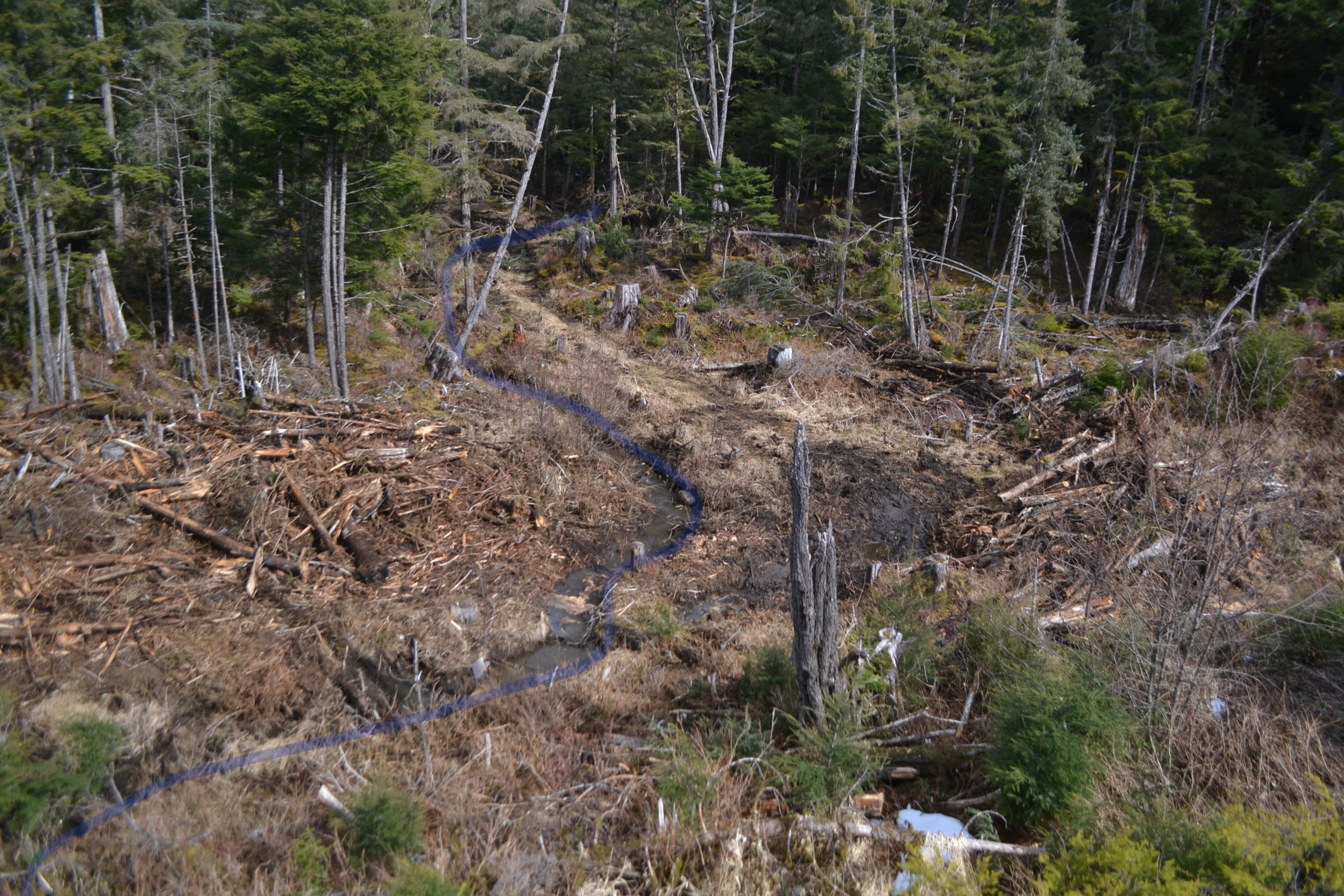 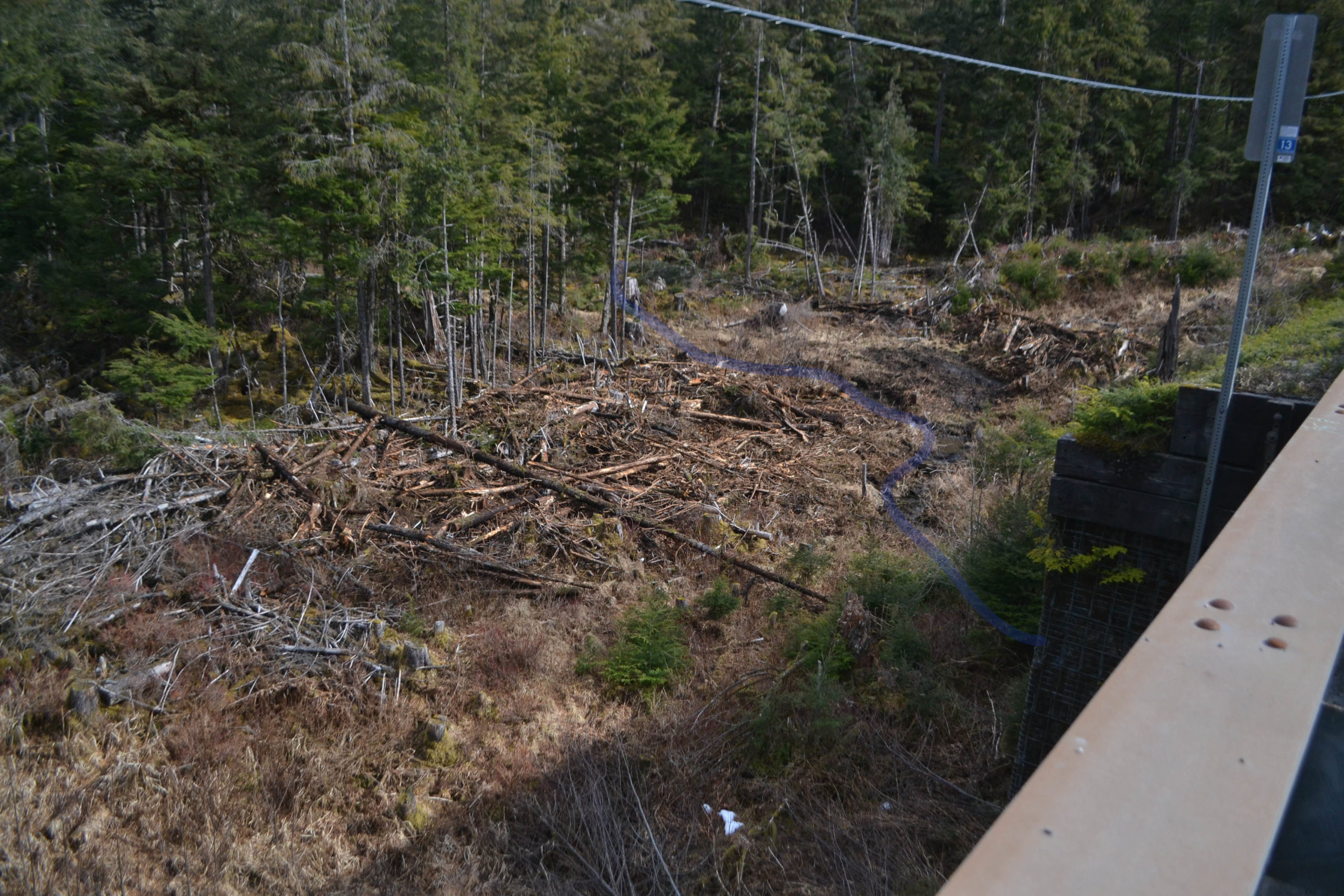 The photograph below shows the area of stream that was previously smothered, now clear 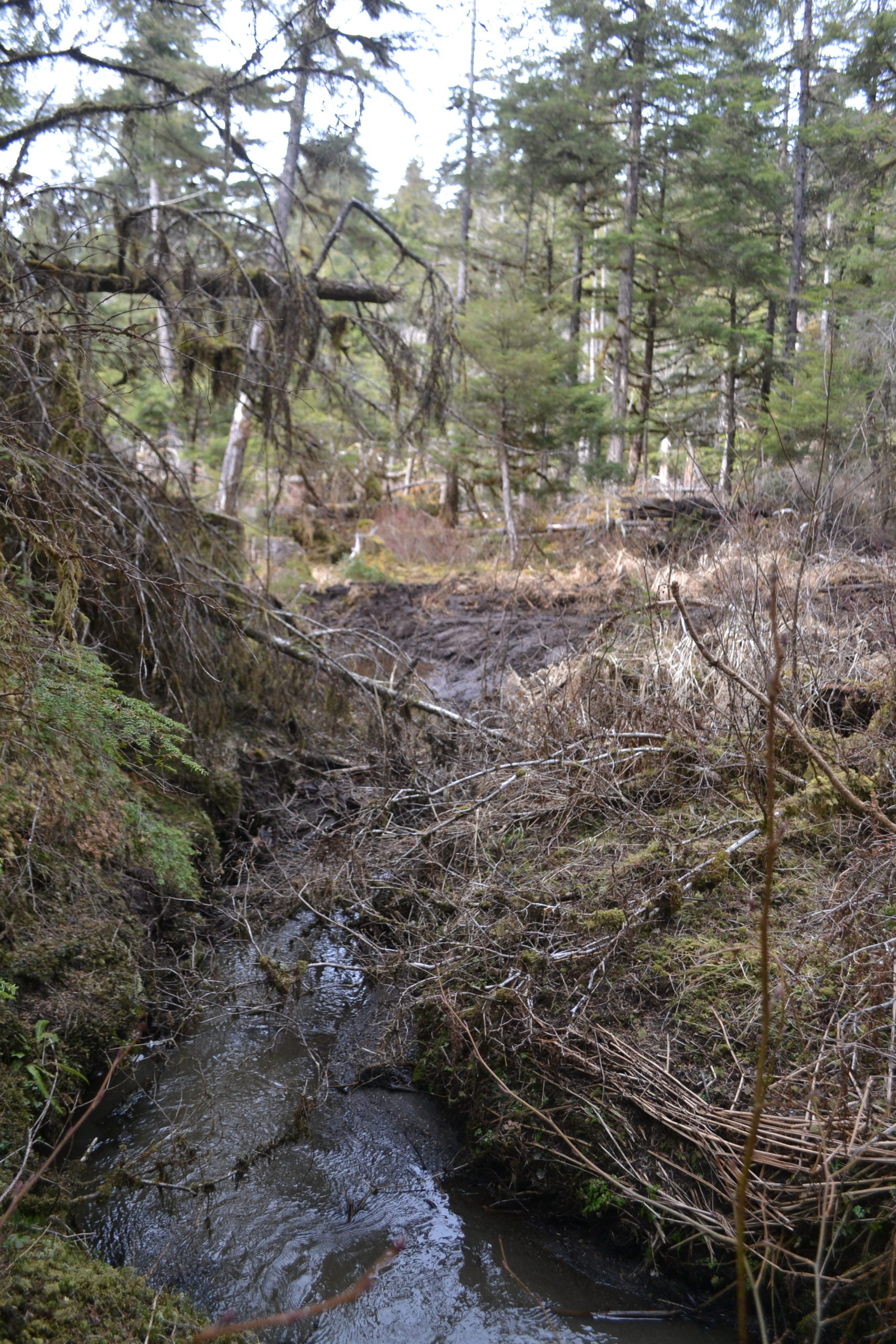 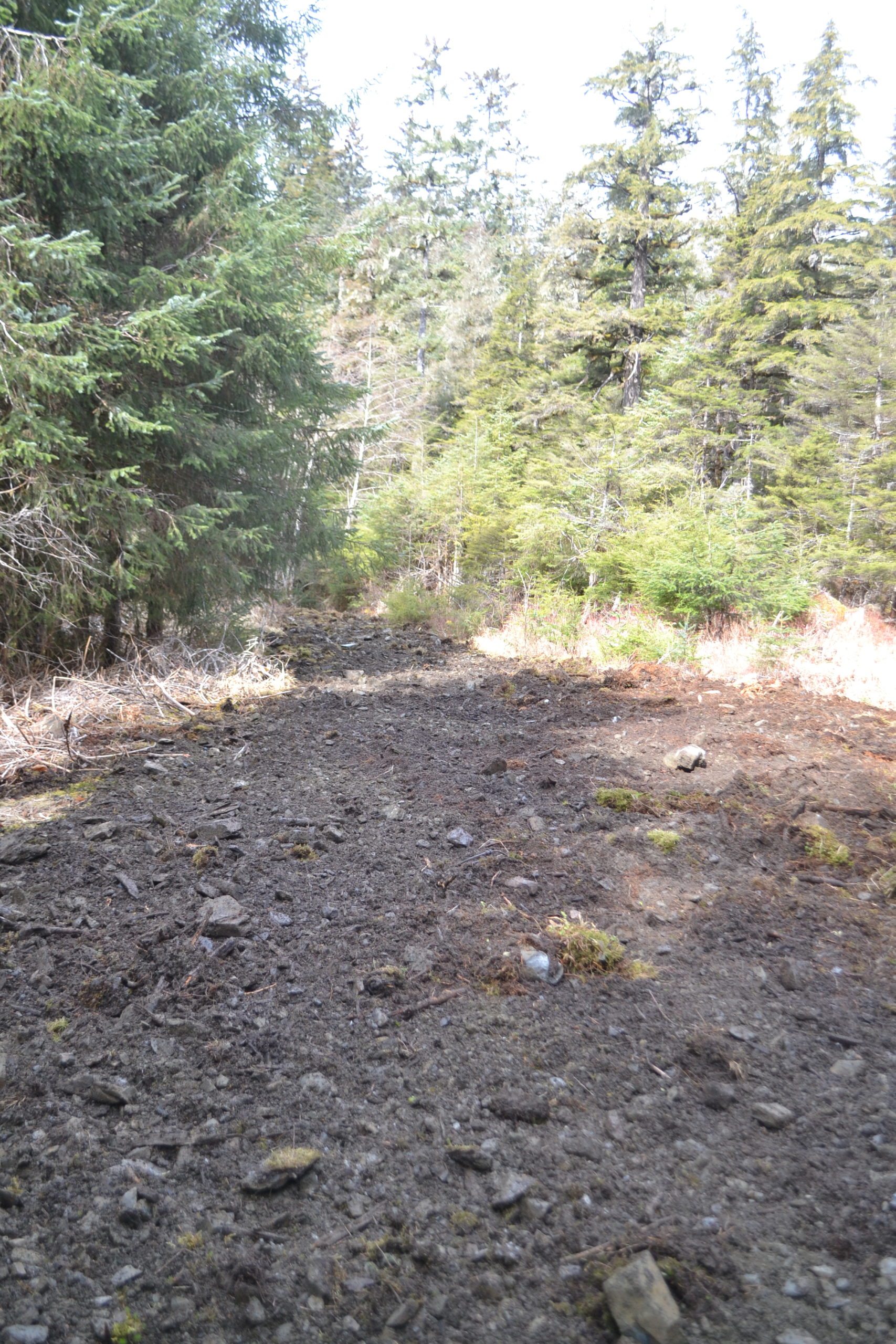 The photograph above shows the former road leading to the bank of the main stem of Pat’s Creek. The freshly broken up soils will encourage growth of alder, spruce and other vegetation to rehabilitate the site. 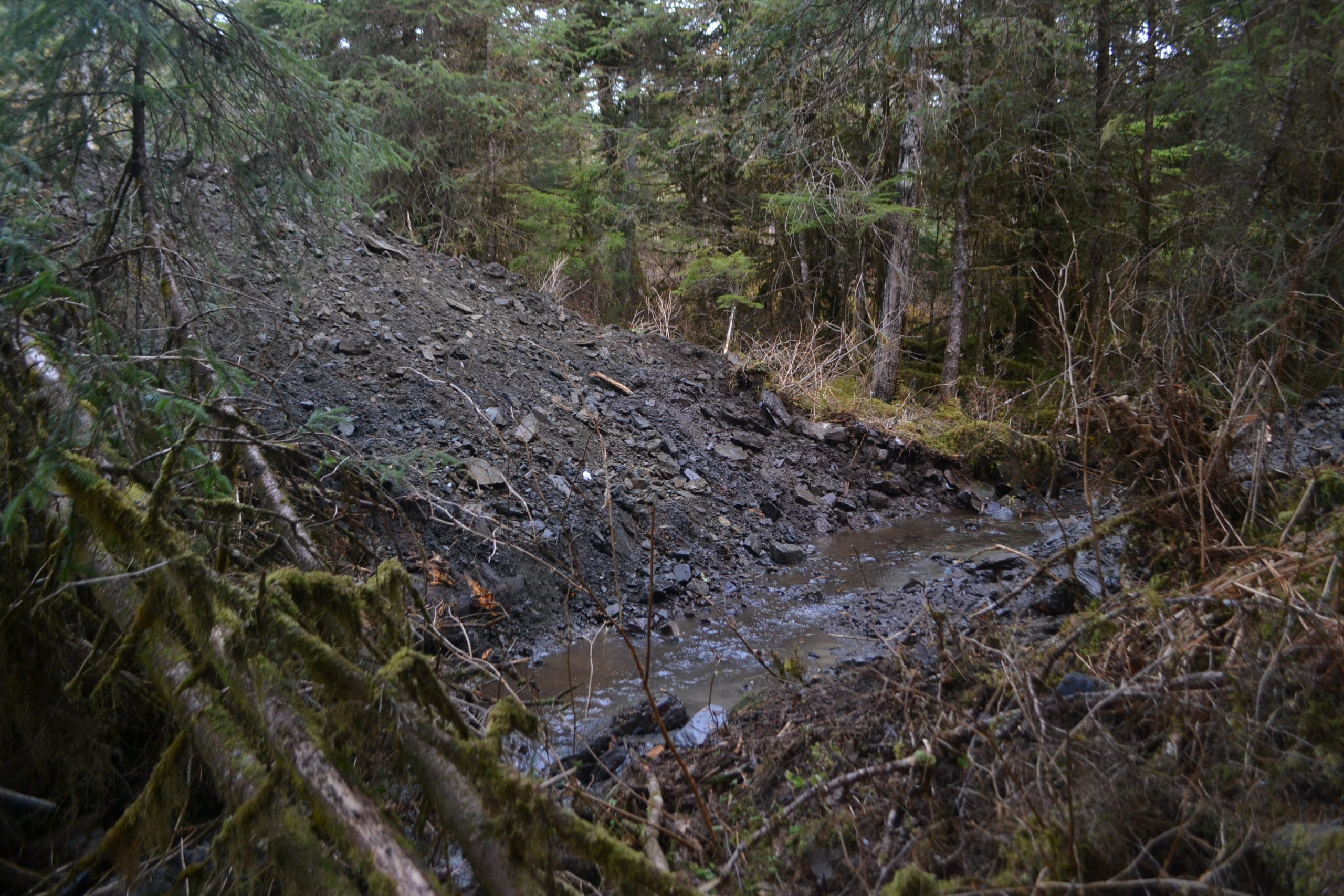 This photograph shows the improved channel and material moved away where the log stringer bridge once restricted stream flow and fish passage.

Over time the channel will continue to move and meander freely through this project site as changes in flow and water level fluctuate. Vegetation will grow along newly exposed streambanks, and some fallen trees and logs will move around and interact with the stream, creating beneficial habitat and safe cover for fish passing through.

Our primary goal for this project was to restore these basic features, so that nature can take over from here and run its course on this portion of the Pat’s Creek watershed.

SAWC would like to thank our partners at the US Fish and Wildlife Service for supporting this project, as well as BW Enterprises in Wrangell for executing this work on the ground.