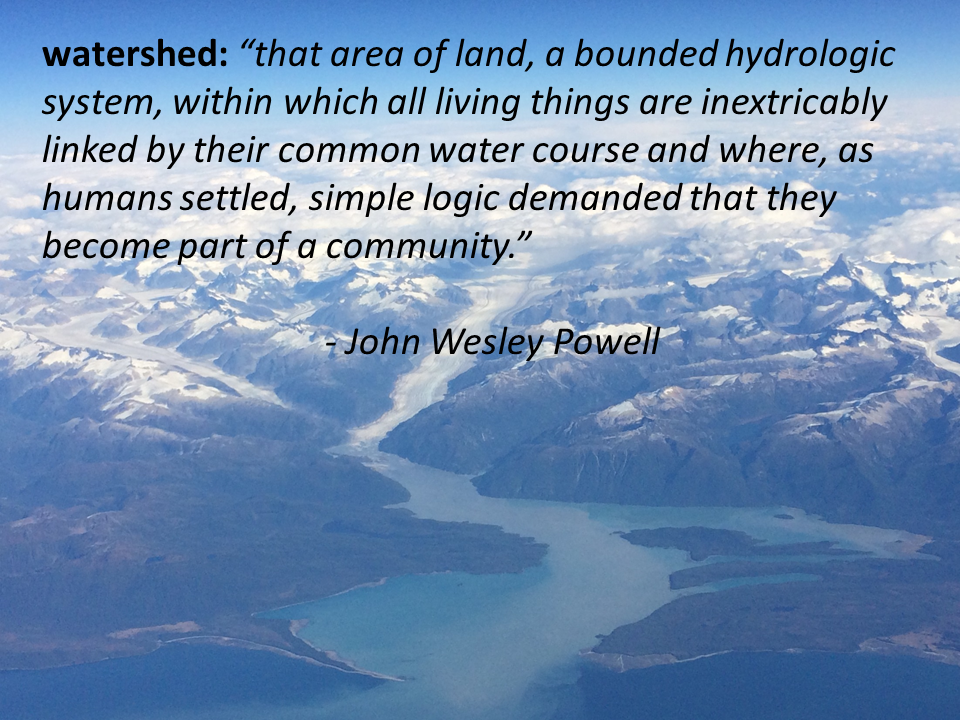 SAWC was formed by a collective of Southeast Alaska watershed councils in 2005. These citizen-lead organizations recognized that by building a network of professionals and community leaders they would be more effective at sharing resources, implementing projects on the ground, and fostering awareness and stewardship of the many watersheds in southeast. SAWC’s core objective is to build a regional voice that promotes community watershed stewardship. SAWC does this by bolstering the capacity of communities throughout Southeast Alaska to implement local and collaborative approaches to the management, development and stewardship of the region’s watersheds.

Goal: Our goal is that Southeast Alaskans:

Mission: We foster partnerships and inspire Southeast Alaskans to steward our watersheds and support communities through participatory projects, research, and learning.

Vision: We envision a unified Southeast Alaskan voice for our communities that are sustainably integrated into our watersheds in a way that benefits our ecology, economy, and quality of life.

Rob and his wife Kate live in Juneau and are both passionate about sustainability and enjoying the outdoors.  While working with the Convention on Wetlands, an international treaty promoting the wise use of wetlands, Rob facilitated restoration projects designed to provide clean water to people in Africa and Asia.  Closer to home, he protected wild places in the Tongass National Forest as Conservation Director for the Southeast Alaska Conservation Council.  He is excited to partner with the people of Southeast Alaska to bolster the long-term sustainability of communities and wise management of watersheds.  He has a Masters in Ecology from the University of Otago, focused on the restoration of coastal wetlands, and he can often be found sailing, packrafting, or skiing.

Rebecca lives in Juneau with her husband and daughter. She has a graduate degree in Environmental and Natural Resource Sciences from Washington State University and over a decade of experience in stream ecology and watershed science. She’s committed to working with Southeast Alaska’s communities to protect and improve watershed health and promote sustainability. When not at work, she enjoys hiking, berry picking, gardening, spotting marine mammals, and spending time with her family.

John joined the SAWC team in August 2017 as the restoration biologist, bringing with him more than 10 years of volunteer and professional habitat restoration experience in Southeast Alaska. Residing in Juneau since 1994, John was a founding board member of the Juneau Watershed Partnership and chaired the restoration committee from 1998 to 2001. Prior to joining SAWC, John co-managed the U.S. Fish and Wildlife Service’s Juneau-based Habitat Restoration Program for Southeast Alaska. He has also worked for the Michigan Department of Natural Resources, USGS Great Lakes Science Center, USFS Pacific Northwest Research Station, Alaska Department of Fish and Game, National Marine Fisheries Service and as a private consultant. John has over 30 years of experience in the fields of fisheries, aquatic ecology, and habitat restoration. His habitat restoration skills include watershed assessments, restoration planning, riparian protection and enhancement, native plant propagation, stormwater and invasive plant management, fish passage improvement, and aquatic biomonitoring. John is excited to help build the SAWC restoration program and work with member groups to improve watershed health in Southeast Alaska.

Jennifer Nu is honored for the opportunity to work with communities to strengthen local food systems in Southeast Alaska. She holds an interdisciplinary master’s degree from the University of Alaska Fairbanks specializing in local food systems, sustainable development, and community well-being. Prior to joining SAWC, she developed and coordinated community-based health promotion in communities of Southwest Alaska. These participatory projects centered on celebrating traditional knowledge and values of local foods as the foundation for wellness and living a good life. She is thankful for community members and friends in the Yukon Kuskokwim Delta and all across the state who have shared their knowledge, time, and delicious traditional foods with her over the years. With their generosity, she gained a deeper appreciation and understanding of the interconnections between place, culture, and community health. Jennifer is also a freelance writer. In her spare time, she can be found backpacking, paddling, cross-country skiing, photography, and connecting with friends while harvesting local foods and plants. Any and all wild Alaska fish are her favorites.

Jennifer is also the Food Sustainability Regional Catalyst for the Sustainable Southeast Partnership. She is based in Juneau.

Colin spent most of his youth camping and exploring the American west, and while mostly nomadic, often called Tucson, Arizona his home. He eventually would settle in San Francisco, California where he graduated from the California Culinary Academy in 2003 with an Associates Chef’s degree. After 5 years promoting the use of local and sustainable food in kitchens, he was ready to get back into the wild. He went on to lead conservation biology field programs in places such as Namibia, the Yukon, and the Greater Yellowstone Ecosystem. During which he moved east to Massachusetts, and received a Bachelor’s degree in Conservation Biology from Clark University in 2011.

After graduating, he changed course once again to peruse the life of a photographer. Colin used his marketing and photojournalism skills to help sustainable development projects, local food organizations, and non-profits achieve greater results through media and marketing. Culminating in 2016, where he launched a sustainable development company of his own in the rural high plains of Peru, Pachakuti Foods.

Through all of his travels, Colin has always heard the call of glaciers and salmon. It was with great joy that he found his way back to the lush rainforests and rich coastal areas of the Alaskan Southeast. To him, there is nothing finer than doing good work that benefits local people, the environment, and food. It is an especially large honor to do so in such a wild, intact, and incredible community and place like Southeast Alaska.

Angie grew up in Grand Rapids, Michigan and first came to Southeast Alaska in 2008. After traveling the lower 48 and failing to find a place that compares in beauty and character to Southeast, she returned to Wrangell in 2010 and has been there since. Over the years she has worked various field jobs with the US Forest Service and conservation corps, as well as a local wilderness behavioral health program. She earned her Bachelor’s degree in Environmental Studies and Communications from Western Michigan University and is working to promote community-based watershed management and sustainable community development throughout Southeast Alaska. Angie began working with SAWC in 2012 and loves the opportunity her position offers her to connect and work with the variety of vibrant communities that make up Southeast Alaska.

In order to stay true to our core principles of building a voice for communities we believe this coalition should be steered by regional leaders and community professionals working to protect, promote and restore our region’s watersheds

Ben moved to southeast Alaska in 1981 for the amazing skiing and paddling opportunities. He started working for Alaska Department of Fish & Game in 1984 and spent over 10 years as the Habitat Biologist for northern southeast Alaska, including Haines, before retiring in 2008. One of his last and favorite projects was helping to found watershed councils throughout southeast Alaska including Takshanuk Watershed Council. This work reinforced his understanding about the connection between a healthy community and a healthy watershed. He believes community involvement and participation is critical to meeting these goals. Ben is also on the Steering Committee of Rivers Without Borders, a transboundary conservation organization.

Malena lives in Petersburg where she commercially fishes with her partner. Malena previously served as Executive Director for the Southeast Alaska Conservation Council. She completed her Graduate Internship with the founding member groups of SAWC in 2006, and has since continued advocacy in the non-profit, grassroots based world of natural resource management in Southeast AK and the Pacific Northwest.

Steve lives in the community of Hollis on Prince of Wales Island. With an education in Fisheries Biology from the University of Washington, Steve worked for nearly 20 years as a fisheries biologist. Most of his career has been spent in Southeast Alaska working for ADF&G and the Forest Service. Steve brings his experience and understanding of the life histories of the native salmonid fishes found in Southeast Alaska, including their freshwater habitat requirements and factors limiting their production, to council SAWC’s program and project development.

Chris was born in the Flushing Creek watershed (Forest Hills, New York), raised in the Rahway River watershed (Cranford, New Jersey) and has lived in the Gastineau Channel watershed (Juneau, Alaska) since 1991. He studied two years of forestry at Paul Smith’s College in the Adirondacks (1979-1981), earned a B.S. in Natural Resources Management at the University of Alaska Fairbanks (1981-1985) and received a master’s degree in Public Administration from the University of Alaska Anchorage (1986-1987). He served as a Peace Corps Volunteer at Sapo National Park near Juarzon, Liberia (1987-1989). Chris worked for the Environmental Protection Agency from 1990 to 2018, and performed a variety of jobs including: managing multi-million dollar grant programs for water pollution control; writing safe drinking water regulations; protecting water quality and fish habitat throughout the Tongass National Forest; promoting tools for watershed science and watershed management; preserving aquatic resources and wetlands in Southeast Alaska; and regulating ocean dumping. He joined the SAWC board of directors in 2019.