Restoration of salmon habitat at Pat Creek near Wrangell is underway.  SAWC and our partners are adding large woody debris to about 1 km of stream.

Fish like trees (when they fall in they create pools and other preferred habitats). The lack of mature trees along (and also in) the creek has resulted in less than optimal fish habitat including overwidened areas lacking pools and cover.

Here is a before and after shot from the same spot on Pat Creek that shows the addition of large wood. 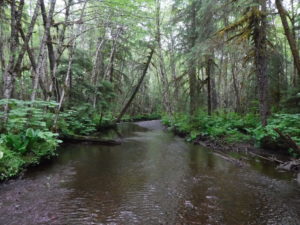