SAWC restoration biologist John Hudson traveled to Gustavus to participate in the “Community Curiosity Series.” Gustavus resident Susan Brook developed the series as an opportunity for locals to learn about the natural history of the area. Topics this summer included moose ecology, geology, and lodgepole pine decline. John lead 24 participants on a watershed walking tour of Harry Hall Creek, a small groundwater fed stream that provides important habitat for salmon, trout, and char in the Good River watershed. Participants visited a culvert that blocks fish migration as well as one of several new bridges that have replaced barrier culverts along the stream.

Using coho salmon as an example, John discussed the need for removing man-made barriers in watersheds so that adult and juvenile fish can access seasonal habitats used for rearing, spawning, and overwintering. Many people are not aware that juvenile coho migrate extensively within watersheds, such as among the areas where they were born, feed and grow, and overwinter. These areas can be miles apart or even in separate watersheds. Culverts that are easily navigated by adults can be complete barriers to small, weak-swimming juveniles moving among these important habitats. SAWC has been working with the U.S. Fish and Wildlife Service and City of Gustavus to remove six barrier culverts on Harry Hall Creek that block or impede fish passage. 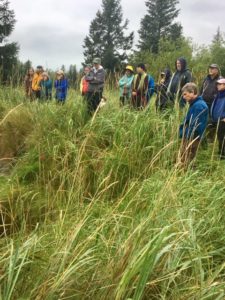 Photo captions: Gustavus residents stand on the banks of Harry Hall Creek during a watershed walk.