Eulachon, locally pronounced “hooligan” have been an important subsistence food source for residents of the Chilkoot and Chilkat Rivers near Haines for generations. Eulachon are anadromous (spending part of their life in the ocean, part in fresh water) fish that gather in large schools at the mouths of rivers and streams before heading up to spawn each spring. During annual runs, the small, oily fish can be easily harvested in large quantities, and are often smoked or dried and eaten as a traditional subsistence food. In Southeast Alaska Eulachon runs are present in the watersheds of the Unuk, Stikine, Taku, Mendenhall, Lace, and Chilkat and Chilkoot Rivers.

In southern portions of Eulachon habitat range the species has been listed as threatened due to declining populations. Fisheries managers are uncertain as to what is causing a decline in Eulachon populations, theorizing that overharvest, habitat degradation, and effects of climate change may all be contributing factors.

Out of concern that similar population declines could occur in northern Eulachon runs and threaten the community’s subsistence resource, the Chilkoot Indian Association began monitoring populations of the Chilkoot River in 2010. With support from the North Pacific Landscape Conservation Cooperative, and in partnership with the Takshanuk Watershed Coalition and researchers with Oregon State University, the population study is continuing on into it’s 5th year of collecting baseline data on local eulachon populations.

In 2014 project partners brought in Dr. Taal Levi, a researcher with Oregon State University, to implement the use of Environmental DNA (eDNA) technology to estimate Eulachon populations. A relatively new technique, eDNA allows researchers to sample water for minute traces of a species’ DNA, from shed skin, scales, fecal matter, or reproductive material. Testing these samples using methods similar to those used in the fields of forensics and medicine, researchers can efficiently determine the presence or absence of a species in a large area. This new eDNA technique has the potential to revolutionize aquatic science, presenting an easier, less labor intensive, and highly efficient alternative to traditional methods of field sampling.

The Eulachon project currently employs two local 5-person sampling crews, as well as two TWC staff to manage field data collection and management. As the project continues to develop, the benefits and implications of the data collected and methods used could be seen region-wide. Presently there is little population data for Eulachon in the northern region of Southeast Alaska, and the data collected through this study will be used to inform trends across the region.

This community watershed management initiative will equip fisheries managers to better identify and respond to changes in population and work toward the continued conservation of this important species, so that subsistence harvesters may continue to enjoy this traditional food source for generations to come. 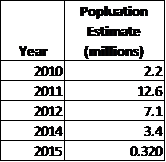 For more information on the Eulachon Population Estimate Study, contact: