Come join us at AB Hall on December 18th at 7pm for 11 short films. Admission goes to support the projects of the Taiya Inlet Watershed Council. 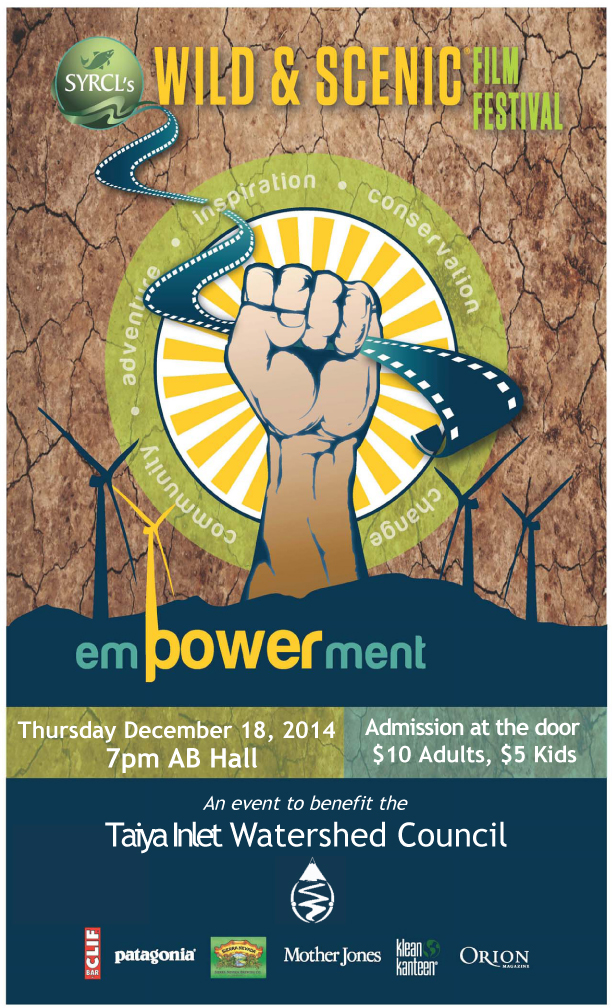 I am Red: The Colorado River runs 1,450 miles across seven states and two countries supplying water for 36 million people. It flowed to the sea for six million years but has not kissed the ocean since the late 1990s (2013, 4 min).

Ryan’s Stories: Ryan Hudson grew up in poverty, living in and out of homeless shelters. His life changed forever when he was introduced to snowboarding through Outdoor Outreach, a non-profit organization dedicated to using outdoor activities to empower at risk youth (2013, 7 min).

A Brief History of the 5-Cent Bag Tax: When your city is overflowing with plastic bags, how will you react? In this humorous short, Jack Green, head of the Department of the Environment, is on a mission to rid the city of its plastic bag scourge (2013, 2 min).

Vultures of Tibet: In rapidly developing Western China a sacred ritual where the bodies of Tibetan dead are fed to wild vultures is a popular tourist attraction. This film reveals the current state of ideological issues in Tibet today – where nature, culture, humans, animals, spirituality, and politics are interconnected (2013, 19 min).

Into the Mind: Experience the majesty of Alaska, Bolivia, the Himalaya and beyond, and dive into the mind of a common skier attempting the ultimate mountain adventure (2013, 12 min).

My First Fish: A boy catches his first fish. After an epic battle, the boy has a chance to hold the fish. They make eye contact, and the memory is etched into the child’s brain forever (2013, 7 min).

Fighting for the Fataleufú: In the 1980s boaters successfully navigated the Futaleufú River in Chile, and eco-tourism flourished, bringing vibrant opportunities and jobs to the community. Local activists and boaters now fight to preserve this unique river and its community… a fight, too, for the future of Chilean Patagonia (2013, 16 min).

Water & Wood: More than a century of ‘cleaning’ dead wood out of rivers removed critical life support systems needed for salmon and many other river creatures… and it’s now time for some heavy lifting (2013, 4 min).

Sage Steppes: Expert long-distance hiker Sage Clegg treks 800 miles across the new Oregon Desert Trail, created to highlight that Oregon is also a desert state – home to great beauty and some of the best untouched wildlife habitat in the West (2013, 9  min).

SLOMO: Depressed and frustrated with his life, Dr. Kitchin abandons his career as a neurologist and moves to Pacific Beach. There, he undergoes a radical transformation into SLOMO, trading his lab coat for a pair of rollerblades and his IRA for a taste of divinity ( 2013, 16 min).

This entry was posted in Uncategorized. Bookmark the permalink.