The StreamWalk is Under Construction as of September 2015

The Pullen Creek StreamWalk is an interpretive trail designed to provide visitors to Skagway with easy access to popular natural and historic locations in and around Pullen Creek and Pullen Pond. The 1st phase of the project is now under construction. This part of the project starts at the Broadway Dock and ends at Congress Way. Features include a gravel trail, four stream overlooks, replacement of the footbridge south of Pullen Pond, a dock on Pullen Pond, and a series of signs that offer information about Skagway’s natural and cultural resources. 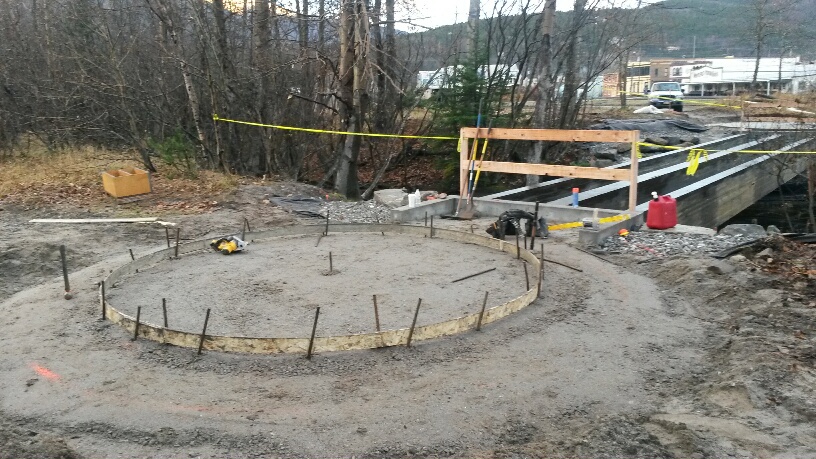 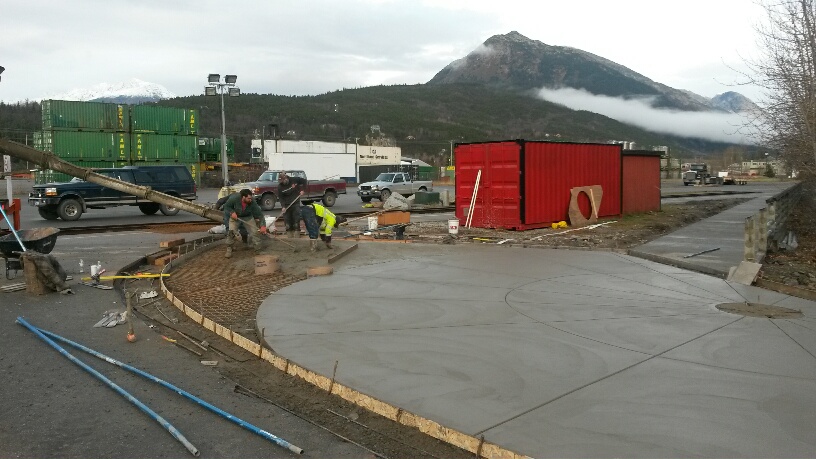 The StreamWalk is funded through a Federal Highways Administration Federal Lands Access Program Grant with matching funds from the National Park Service. The project partners include Municipality of Skagway (MOS), Taiya Inlet Watershed Council (TIWC), the National Park Service, U.S. Fish and Wildlife Service, White Pass and Yukon Route Railroad, as well as support from Alaska Power and Telephone and Skagway residents. Corvus Design of Juneau and NorthPoint Construction of Skagway are responsible for the design and development of StreamWalk.

Interpretive signs for the trail were provided for public viewing in September, 2015 with comments and suggestions for improvements now being incorporated into the project. 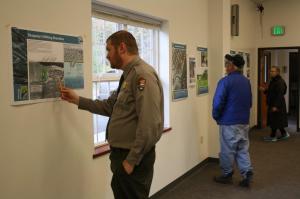 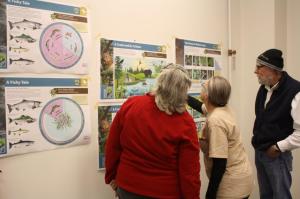 Right: NPS employee checks out a sign narrating the changes to Pullen Creek’s alignment since the first settlers came to Skagway. Left: Residents look at some of the interactive kids’ signs.

The 1st phase of the project, including placement of interpretive signage is due to be completed by Spring, 2016. During the winter of 2015/2016 TIWC and MOS will be working with Corvus Design and the public on the 2nd phase of the project with the goal of finalizing a route that directs pedestrians to the Moore House Property, and eventually, City Hall.

For information on the initial planning stages please visit http://pullencreek-streamwalk.blogspot.com/.

In February 2009 the Municipality of Skagway (MOS) completed a Comprehensive Plan to guide community growth to the year 2020. The plan identified non-motorized trail systems as an important community asset. Two priority non-motorized transportation issues in the plan included:

1.  Ensuring the safety of visitors and employees moving between the waterfront and downtown areas

During development of the comprehensive plan, several parties (Municipality of Skagway, Taiya Inlet Watershed Council, U.S. Fish and Wildlife Service and the National Park Service) proposed creating an interpretive walking path that ties together historical and natural history points between Pullen Pond and the City Museum via the Pullen Creek corridor, which runs along the east side of the Skagway Historic District. Pullen Creek is an anadromous waterbody listed for Coho and Dolly Varden spawning and rearing habitat as well as Pink spawning and Chum presence. It is easily accessible to visitors and residents, which offers unique opportunities for salmon viewing and sport fishing.

This project is listed in the Comprehensive Plan as a specific action (6.20) under goals for pedestrian and bicycle routes. The action states: “Work to develop a contiguous walking trail with interpretative signage from Pullen Pond and Creek, through the east side of the historic district, to the City Museum.”

The Taiya Inlet Watershed Council (TIWC), in partnership with the Municipality of Skagway (MOS) and the U.S. Fish and Wildlife Service (FWS), hired Corvus Design to provide Pre-design Services for the Pullen Creek StreamWalk Project in Skagway, Alaska. The pedestrian trail project is proposed to extend along the Pullen Creek corridor from South Broadway Ave. to the MOS City Hall and Museum at East 7th Street.

The goals of the StreamWalk Project are to:

2.   Identify opportunities to rehabilitate stream and riparian habitats along the lower Pullen Creek corridor for the benefit of fish, wildlife, and the public.

3.   Provide an educational walking tour, including the potential for guided walks, for Skagway visitors and residents within the lower Pullen Creek corridor.

4.   Provide an alternative pedestrian route to the City Museum area for visitors originating at the cruise ship and Alaska Marine Highway System docks.

In September 2013, the Municipality of Skagway received a $1.7 million grant from the Federal Highways Administration’s Federal Lands Access Program matched by $171,000 from the National Park Service to build the entirety of the StreamWalk. The $1.8 million will cover surveys, construction designs, construction, inspection, and project management costs. TIWC will remain the project managers on behalf of the Municipality.